The Portland Municipal Airport is a city owned, public use airport located three nautical miles northeast of the central business district of Portland, Tennessee. It is included in the National Plan of Integrated Airport Systems for 2011 to 2015, which categorized it as a general aviation facility.

The Portland Municipal Airport covers an area of 157 acres at an elevation of 817 feet above mean sea level. It has one runway designated 1/19 with an asphalt surface measuring 5,000 by 100 feet.

The completion of the new terminal building at the airport marks a milestone at the expansion of the facility now up-to-date and more welcoming to increasing air traffic and economic development.

"Over the past 10 years, our private and corporate air traffic flow has increased 5% each year," airport Director Douglas Hunter said. "Many existing and new industries coming here tell us the airport is very important to them."

The new $1.3 million, 4,200-square-foot terminal building is three and a half times larger than its 1,200-square-foot predecessor. The building is called the Larry Collins Aeronautical Business Center after the Portland developer instrumental in establishing the airport.

The building was funded mostly through grants from the Federal Aviation Administration. The FAA gives municipal airports $150,0000 annually in grant money for improvement projects as long as facilities meet safety inspections. FAA grant funds compile through taxes from aircraft fuel and airplane ticket sales without burdening all residents. The operational expenses for Portland's airport come from the city.

"I have been working on this grant for 10 years," Hunter said. "It's a community project."

Although the project exceeded its original budget, it became possible with approximately $130,000 in private donations from the Portland community. Local residents and supporters also donated décor such two fireplaces for the specious 1,000-sqaure-foot lobby that features five seating areas with two glass walls.

Sumner is one of three Tennessee counties to have two general aviation airports, with the other in Gallatin. Other counties home to two airports are Shelby and Franklin.

The Franklin-based firm has worked on this and other upgrades for the Portland airport.

"Many people don't know they have an airport in their community or realize of the airport's benefits to their community and what it does for them," Sisemore said. "Police and medial emergency crews commonly use the airport. If your child gets injured and a hospital helicopter needs to land, you need the airport." 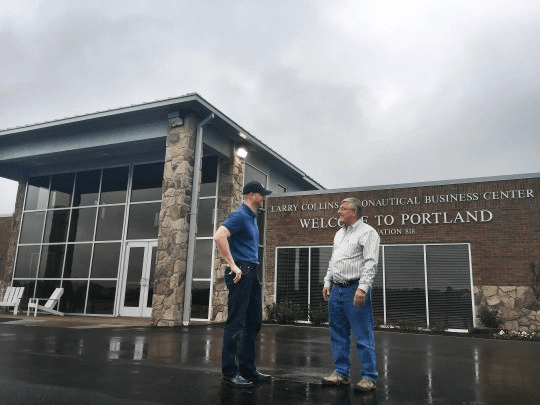 Having worked with many communities where industries are looking to relocate, Sisemore said, businesses look at tax structures, workforce and transportation. Having an airport makes or breaks the deal.

"I've never had a business say, 'I went there because of the airport,'" Sisemore said. "But I've talked to plenty of company executives who've said, 'I didn't go there because they didn't have an airport.' The airport does matter."

Other than for timely travel, airports are essential for industries' just-in-time deliveries. If an important machinery part breaks, delivering it quickly by air can save businesses and employee money and time.

The new building offers much more space with separate conference, training and pilots' lounge areas that were before in the same space. A new briefing room allows pilots to check the weather on two televisions, create travel paths and file flight plans on a computer.

The old terminal building was built in 1972 with a front lobby and restrooms. In 1978, a training room was added.

Portland native and pilot David Fleming was there for the old building's inception and although he no longer flies airplanes, he visits the airport several times a week. The new building makes him proud.

"I'm impressed," Fleming said. "It has everything a small airport could want and they're constantly improving the facility. It makes us a more progressive town and county."

Other recent facility improvements include an $180,000 move of the jet fueling system above ground, which better meets U.S. Environmental Protection Agency standards. 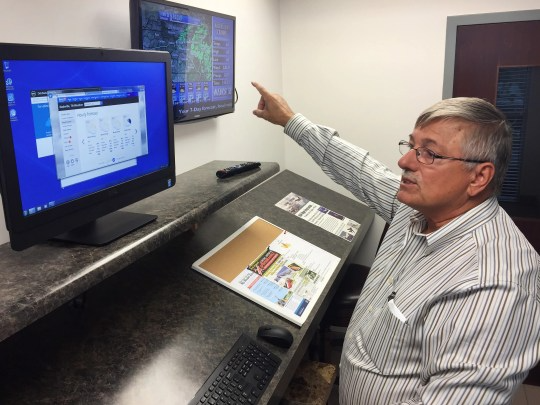 "If you have a leak, it makes it a lot easier to control and avoid contamination," Hunter said. "Fueling is also quicker and safer."

Portland's airport is also a stop for refueling of LifeFlight helicopters as well as corporate and private aircrafts.

"It's very important that the airport is here to serve the community," Hunter said. "It's not just for the city of Portland but for the whole Sumner County."