The area now known as Portland was settled by the Thomas Buntin family in the early 1800s, when it was found to be fertile farmland. Some say the area was known as Hazelnut Thicket in those days. 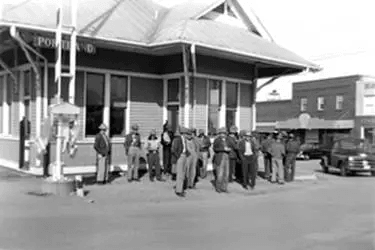 In the mid-1800s the Louisville and Nashville Railroad Company (L&N) began construction of a railroad line through this area to connect Nashville and Louisville, Kentucky. Buntin convinced them to route the railroad directly through his property by donating a plot of land to the L&N. The first train depot was built by Eli Perdue on that land as a railroad stop that came to be called Richland Station. The L&N train made its first stop at Richland Station on October 31, 1859. Portland's Sesquicentennial was celebrated in October 2009, marking the City's birthday of 150 years based on the date of the first train stop.

Thomas Buntin also became the first postmaster of the settlement, with a post office located inside the depot.

Because of confusion with another railroad stop named Richland in Grainger County, the small village of Richland Station was re-named Portland in 1888. No one knows for certain how the name "Portland" was chosen, but it has been suggested that when a small village immediately south of Louisville called Portland was absorbed into the City of Louisville, and its train depot closed, L&N Railroad Company suggested use of the name Portland for the train depot here. Not official fact, but logical.

Later on, businesses were established around the train depot, on Depot Street, the area now known as Main Street.

Portland was incorporated as a city by the State of Tennessee in 1905, and the first mayoral election also held in May 1905. Risdon Dickey Moore was elected as the first mayor. He had one of the first houses on High Street built for his family. Several descendants of the original Moore family are still in this area.

Downtown Portland survived 3 major fires from its earliest years, and even a train wreck in the 1920s.

Portland's claim to fame as the "Strawberry Capitol" came about due to having many successful strawberry growers in the area, one from as far back as 1885, and the related strawberry industry that peaked during the first half of the last century. For many years, strawberries were truly the mainstay of the local economy, with multiple growers' associations in place. Almost everyone here had knowledge of raising the crop or picking the berries - usually both. There were multiple strawberry processing plants located in town in those days - such as Kruse's, Tennessee Fresh Frozen Foods and Southland. There was also the Strawberry Crate Company that manufactured strawberry crates and quarts and employed up to 200 'hands', supplying a half million crates per year. There are a scant few long-time Portland residents still with us who worked in the plants and crate factory and can tell the stories.

At one point, about 2,000 acres of strawberry crops were raised in and around Portland, with most shipped out by railcar. In a peak year, a record of 115 rail cars shipped out in one day. Locals report that during World War II, Portland strawberries were also air-shipped to England.

In 1940 the annual celebration of strawberries began - advertised in the Upper Sumner Press as a "Celebration to Open the Berry Harvest" - and it ran for 3 days, complete with a queen and a parade. Tennessee Governor Prentice Cooper was on hand, as well as mayors from surrounding towns and newspapermen from Nashville. Now called Middle Tennessee Strawberry Festival, it is the longest-running festival in Sumner County, with various activities that go on for days prior to parade day on Saturday, when it is said to attract thousands to Portland. (Visit the Chamber of Commerce website to learn more.)

The first-known school house in the Portland area was known as Nolen School, with classes that began in 1846. It is not known how many years it was in use, and the old building was mistakenly demolished in recent years. What remains of the 1915 Sumner County High School is now in use as a community center at Richland Park. The 1931 Sumner County High School became Portland Junior High School in 1962 and was destroyed by fire in December 1967. The gym now in use at Richland Park is all that remains of the 1931 school. So, unfortunately most of Portland's historical landmarks have been lost, including the second and best-known Portland Depot that was built in 1895; demolished in an urban renewal project downtown during Fred White's mayoral term in 1972. Fortunately, one of the most noted photographs of the Portland Depot was taken by Frank Empson not long before its destruction. And local artist-singer Ronnie McDowell painted a picture of the depot for history's sake, thus preserving a memory that would've otherwise been lost.

Historic Cold Springs School was a one-room school built in 1857 on Thomas Baskerville property northeast of (modern-day) downtown Portland. Used as a school for grades 1 through 8 until 1933, it was also used as a meeting house for churches during that time. David Lipscomb preached there and from that gathering, Portland Church of Christ was formed. And when Camp Trousdale, a confederate training camp, was located on the grounds around the school during the Civil War (1861), the building was used as a hospital for sick and wounded confederate soldiers. World War II maneuvers were also held around the school in the early 1940s to train some of our U.S. soldiers prior to being shipped out to fight in England and France. The old school building was moved to Portland's Richland Park for restoration and preservation in 1975. (For more information, see Highland Rim Historical Society.)

The Portland Preservation Foundation was formed in recent years as a means to restore and preserve the Moye-Green House; a private home from the mid-1800's that also served as a boarding house, due to its close proximity to the Portland Depot. The owners served meals and rented rooms to train passengers and other folks coming into Portland for overnight stays. It is located at the corner of North Russell and Wheeler Streets and is part of the National Historic Register. The City of Portland granted permission to the Portland History Museum to use the Moye-Green House as a museum of local items, and it opened in October of 2021.

The Foundation is now in the process of directing restoration of the old Temple Theater, located on North Russell Street, immediately across from the site of the demolished Portland Depot. It was the main source of entertainment in downtown Portland from the mid-1930s until it closed in the 1950s. Construction is almost complete and the theater will be a tremendous asset to the downtown area.

Portland doesn't have numerous historic buildings that have survived the years as do some other cities in Sumner County, but it is still a historic place with a storied past.

Notable people who were originally from Portland include: